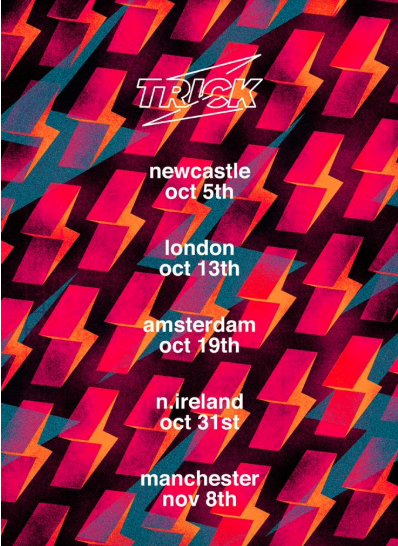 Newcastle-born DJ and producer Patrick Topping has unveiled a European TRICK tour,  named after his burgeoning record label. Running across five cities this October and November, the parties will be characterised by incredible bespoke production and exciting lineups featuring artists at the forefront of the house and techno world.

Topping kicks things off with a homecoming show at the new 4500-capacity site Mainyard in Gateshead for a special day party, exact location TBA on October 5th. Joining him will be fellow North East talent Elliot Adamson, Chicago icon Green Velvet, Eats Everything, Ilario Alicante and Bryan Kessler. The following weekend, on October 13th, he heads to London’s Printworks, hosting TRICK in the LIVE Press Halls – a space rarely used for DJ shows. He will be joined by Len Faki (who will play an exclusive house set), Roman Flugal, Paul Woolford and Detroit’s K-Hand. The following Saturday Topping takes to Amsterdam Centraal Station for an ADE collaboration with Audio Oscura – Krystal Klear and Man Power will also go back-to-back and Spencer Parker will also play – before a night in Northern Ireland on October 31st (full lineup TBA). Rounding things off, Topping will host his own star-studded Warehouse Project on 8th November at the all-new Mayfield Depot venue, joined by Ibiza favourites Luciano, Eats Everything, Skream, Kolsch, Paco Osuna and more.

TRICK was initially launched as a platform to exhibit Topping’s versatility as a producer, as well as a platform to showcase the wealth of emerging talent which he has been pushing in his DJ sets. He has since released two EPs on the label, ‘Watch What Ya Doing’ and ‘Turbo Time’. The latter of which was recently selected as the ‘Hottest Record’ on BBC Radio 1, gaining support from the likes of Gerd Janson, Denis Sulta, Fisher, Diplo, Eats Everything and Jamie Jones.

Topping’s biggest release to date came with the 2017 Hot Creations smash ‘Be Sharp Say Nowt’, which continues to dominate dancefloors two years on while racking up 12 million Spotify streams. He has also picked up a wealth of dance music accolades over the years, including Music Radar’s ‘Best House Producer/DJ 2018’, the DJ Award for Best Tech House Artist on three occasions, the DJ Mag ‘Best of British’ award and reaching #11 in the 2016 Resident Advisor ‘Top 100’ list.

In the midst of a typically hectic summer, Topping is fresh from performances at Kappa Futur Festival, Ultra Croatia, EDC Las Vegas and the Zurich Street Parade. Elsewhere, he will play Paradise at DC-10, Elrow in Ibiza, Germany and Hungary, Boomtown Fair, Creamfields, Sonus and a wealth of other high-profile gigs before the end of August.

With the TRICK tour locking in some of the biggest artists in dance music, it’s only a matter of time before it becomes one of the most recognisable labels in the scene.